Laurens ist the most successful rider and won a new CAR (for a year)!

Ride to win was the motto of the riders during the final of our 6th MERA Winter Tournament series! The riders on the first three spots showed greatness in mental arithmetic and really did their best in the last classes to collect even more points. In the end, our rider Laurens Houben, who already took the lead before the final started, was able to extend his lead and defended his first place.

After the jumping class S* at 1.40m level, the three best riders were honored in front of numerous spectators. Alexander Fries found the right words during the prize ceremony, in which the honorary prizes were personally handed over by the sponsors.

With pride and a golden sash, Laurens stood on top of the podium and received the car key of Jaguar E-Pace. This was presented by Anni Rogge, on behalf of Olaf Verfürth from JAGUAR LAND ROVER APPROVED. The sporty Jaguar E-Pace, in an elegant, black version, will be driven now by the Belgian rider for a year. Of course, Laurens did not miss the opportunity to make the first test drive in the indoor hall with thunderous applause. One year sustainability driving - we think that's great.

Runner-up in the overall ranking was Alexander Hufenstuhl, who can use a training course with eight fences from ISITRADE for the summer season.

Judith Emmers, who became third, was also very happy. She is invited for a three nights stay at the Kuhotel by Rilano in Kitzbühel, thanks to the sponsorship from Rilano Hotels & Resort, Rilano Group GmbH.

We will thank our sponsors for their generosity and loyalty, because these three extremely attractive honorary prizes have made the MERA Winter Tournament series even more interesting. 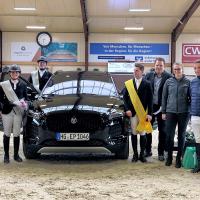 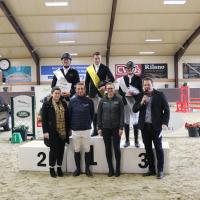 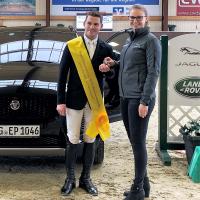 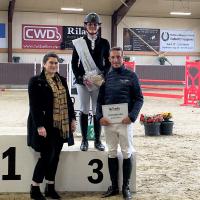 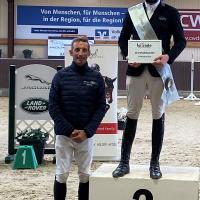 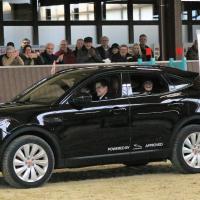